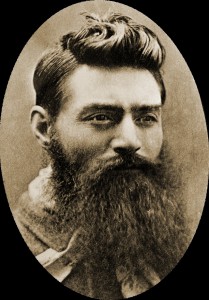 I just finished Peter Carey’s historical fiction book True History of the Kelly Gang, and am now prepared to declare him the best writer of bad prose ever. In the novel, he channels the voice of Australia’s most famous outlaw, New Kelly, who shot three policemen, then hid from the law for months, robbed banks, and became a folk hero. The text is full of run ons and ungrammatical constructions, but in this pigeon English the author finds a poetry that few educated people can achieve.

He pulled off a similar feat in another book, Theft: A Love Story, where one narrator is an idiot savant of human behavior. Books like this make me want to quit writing, knowing that I’ll never achieve anything half so impressive.

Anyone who likes literary or crime fiction should check out this Australian, who won the Booker Prize for Kelly.

P.S. That’s Ned, not Peter, pictured to the left.