They Tell Me You Are Crooked

And they tell me you are crooked and I answer: Yes, it is true I have seen the gunman kill and go free to kill again. 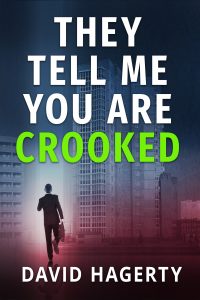 Tyson Evans prepped for school early that morning. The night before, he’d laid out his clothes—brown jeans, a black sweatshirt with The Empire Strikes Back laminated on the front—and stuffed his backpack with vocabulary lists, fraction sheets, and the book Sounder. At breakfast, he’d rushed through a bowl of Lucky Charms, gobbling the green clovers, orange stars, and blue diamonds while pushing aside the pink hearts, which only girls liked.

“You finish your cereal?” his mother called from the bathroom.

Tyson looked over to where she was molding her hair with a pick. “Yes, Mamma.” He scraped the hearts into the garbage and covered them with a paper towel.

“Then get your books ready.”

From under his bed, Tyson removed a binder packed with baseball cards: Rod Carew, Rickey Henderson, Jim Rice, and others less famous, all encased in plastic sleeves. Checking over his shoulder, he saw his mother still working her natural into place. He didn’t want her freaking out about him getting robbed, so he slipped a couple sheets of cards into his backpack before walking to the living room. From the couch Tyson picked up his Chicago Bears warm-up jacket and ski hat. He pulled the latter down so it fell just above his eyebrows, then moved to the front door.

Each day he scrounged for change in the phone boxes near school, which by week’s end bought him a pack of Topps cards at the Liquor Mart. He’d toss the gum, which tasted stale and brittle, then scan the cards. Most packs contained duplicates of mid-market players, the ones nobody wanted, but once and again he’d find a treasure worth many times the cost of the pack. This ritual represented his version of the lottery, a long shot at scoring big.

As he reached for the doorknob, Tyson’s mother called, “You can’t kiss your momma goodbye?” so he spun and retreated to the bathroom, where she stood in her bathrobe and fuzzy slippers.

From her boom box, the Pointer Sisters sang:

I want a lover with a slow hand

I want a lover with an easy touch 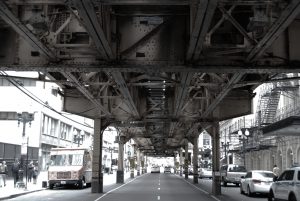 He hugged her robe, which smelled of talcum and detergent, and endured her kiss on his forehead, then turned toward the door in hopes of a quick escape.

“I got to work late tonight,” she said, “so you making dinner for yourself and your sister.”

He paused in the hallway and looked toward the younger girl’s bedroom. She leaned out, her beaded braids clacking together, and said, “I want SpaghettiOs.”

In response, he stuck a finger down his throat and mocked gagging, then spun toward the front door.

“Take the street, not the courtyard,” his mother said. As he unlocked the deadbolt, she pursued, “Tyson, you hear me?”

Outside, in the open-air hallway that his friends called the “holding pens,” Chicago’s winter winds blew in off the lake and stirred up stray papers. Because steel fencing enclosed the walkway, these abandoned sheets had no escape. Tyson pushed aside the confetti as he made his way to the stairwell, ignoring the view that took in not only the lakeshore but also high rises of downtown only a few miles distant.

While descending the fourteen flights, he stepped over garbage bags and broken furniture left there months before when gangs occupied the elevators and the trash chutes backed up. Since people refused to haul it down all those flights to the dumpsters, he had to pass landings reeking of spoiled milk, rotting meat, and dirty diapers. Graffiti by the local sets—a smiling devil with a pointy beard, the letters BDs written in bubbly blue script—decorated many floors, but thankfully the stairwells stretched out empty of people, the hour too early for hustlers.

The lobby also sat vacant. Even Saul, the CHA rent-a-cop on the morning shift, had abandoned his post. Usually, he sat immobile in a plastic chair leaned against the wall, his stomach so large that it prevented him from tucking in his uniform at the waist. At the sight of Tyson, he would raise his coffee mug in salute.

Everybody knew the mug contained not coffee but Crown Royal, and that by noon Saul would disappear to some back office to finish his bottle, but in the morning he maintained the optimistic cheer of a new day. Looked like he’d started early.

Through the glass doors, the courtyard yawned vacant as well. A patchwork of dirt and concrete paved the two blocks to his middle school. Across the way Tyson saw The Reds—brick towers that mirrored his own concrete one. Though right next door, Tyson had never ventured inside them since they belonged to the Rebel Angels. Even though he wanted nothing to do with the gangs, his residence in The Whites made him a rival. 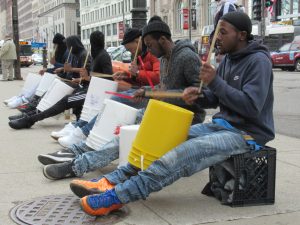 For age ten, Tyson measured small and light, which frustrated him, but which also bore advantages, since older boys ignored him. Most called him “shorty,” which depending on its intonation could be either a put down or a free pass.

On the blacktop, Tyson spotted three other kids about his age, none that he knew, but none sporting gang colors either. He waited for them to clear the parking lot and checked once more for stragglers before setting out. The most direct route cut across the courtyard. Taking the streets required circling all the way around Cabrini Green and would waste ten minutes. Even with time to spare, Tyson didn’t want to risk it. His friends Jamal and Danny planned to swap baseball cards before class, and they both claimed to have Reggie Jacksons to trade, though neither had shown him yet. Their moms also had forbidden them from bringing cards to school, but with just the three of them in the know, Tyson saw little risk.

After debating his path, Tyson set off across the tarmac at a race walk, leaning forward against the wind and the weight of his backpack, both of which conspired to push him backwards. The air bit into his skin and made him look toward the ground, where he watched his own kicks—black, low top Converse All-Stars, a gift from his mom for his last birthday—growing damp and stained in last night’s snow melt. He’d have to stop at the cafeteria for napkins to clean them before meeting his friends.

As he neared the asphalt of the parking lot, Tyson heard a single gunshot. Its pulse echoed off the high rises like a bullet ricocheting through a hallway, making the origin hard to pinpoint. It seemed to come from above. Instinctively, Tyson ducked, though he quickly thought better of it and ran as fast as his pack and the winds would allow. He dodged between cars looking for cover—a doorway, a canopy, even inside The Reds would be better than the shooting gallery—when a second shot cut through the urban canyon.

Next thing he knew, Tyson lay on his back, struggling to right himself like a capsized bug. Pain pierced his right side like a spear to the heart, yet when he reached for it he found only a small hole in his puffy coat. His breath came in rapid gasps, but none of it seemed to reach his lungs. When he tried to sit up, his strength left him.

Lying on that dirt patch, he stared at the sky and watched the clouds spread into a uniform grey that ate up everything around them.