Spying on the Dog

The day Quigley decided to spy on his dog was destined to change their relationship.

Quigley, a man of fastidious tastes, suspected that Jake, his Australian Shepherd, was sleeping on the furniture. Working downtown, Quigley left home for ten hours a day. Lately, he returned to discover the couch cushions disarranged, dirt smeared on them, a wet spot on the armrest. Once he’d even found popcorn kernels wedged in the sofa bed though he couldn’t imagine where the dog could have got them. 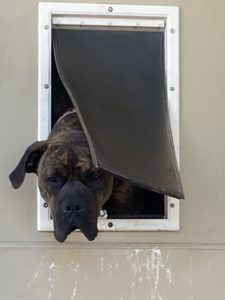 Our new dog, Nathan, spying on me

Resentment built up as each day Quigley found more evidence of doggie destruction. Finally, he sought outside help. At the dog park, he consulted with Spence, whose German Shepherd kept the same exercise schedule as Jake.

Truck, the German, was everything Jake was not. He heeled when called, lay at his master’s side, yet intimidated when needed. Spence had adopted him from a rescue society for failed police dogs, though you could never tell he didn’t make the grade.

In contrast, Jake acted spastic and wild. Aussies had boundless energy that needed a daily release. At the park, Jake ran laps around the perimeter, leading all the other dogs in a futile game of chase (none were fast enough to keep up), while Truck lay calmly under the bench.

“What you need’s a video camera,” Spence said.

Quigley didn’t fancy spending money on a new recorder but discovered that his SLR could be programmed to take a photo every 15 minutes, so the next day he set up the camera and left for work.

That night he scrolled through forty photos in anticipation. The first few showed the couch, love seat, and recliner sitting unused. In the sixth frame the plasma TV played a soap opera that Quigley had never programmed it to record. In the next shot, the back of a man’s head appeared on the couch. Though his face was obscured, the head bore a familiar cut—a bowl of brown hair that faded to stubble below the ears. In subsequent frames, the TV watcher appeared eating pizza and popcorn, inviting Jake on the couch, and even sharing the love seat with a blond woman. The final shots were too intimate to describe, though they gave Quigley a clear view of the man’s face. His neighbor, Rich, to whom Quigley had given a key when he was on vacation, ignored the camera click behind him, distracted as he was by his paramour.

The next trip at the dog park, Spence asked about his experiment.